“Our forest was looking just like the African forest. So green… so beautiful. I just couldn’t imagine… I looked through the camera. I understood” This is what Buddha said when he finished the 9 day workshop on Participatory Video (PV) with us at ECO. Buddha along with 8 other young adults of Hentalbari village in the Sundarbans went through an intensive 9 days where they learnt to create a video. They created their story, learnt to shoot and structure their film. Together they made a film encompassing their lives and it’s exploration, in a poignant film called ‘Sundorbone’r Sundori’ (Sundarbans- Forest Beautiful).

This blog is not about our experiences… though that would make for an interesting story. This one is about what Buddha said on that last day. It’s this astuteness of his, which gives the ever-playful Buddha the wisdom of his namesake. In one sentence he captured for me the essence of my work and brought me a sudden and startling moment of epiphany.

All over the world, especially in our country, Participatory Video is increasingly being realized as a one of the most potent tools of empowerment. A tool through, which the oppressed of the earth find one of the most important fundamental rights of a human being. The right to Voice. The right to tell the world their own story authored by them. Participatory Video has achieved miraculous ends giving the exploited a weapon to fight for themselves and find solutions for their lives.  Experiences and examples abound. The sheer power of holding a camera and walking into a space has the potential to change circumstances. When the person holding that camera happens to be someone who is disadvantaged, then we see the reigning power structures tilt for a while at least.

However there is another aspect of Participatory Video, which often goes unnoticed, unappreciated. It was this aspect, which Buddha led me to in the Sundarbans. When we began the workshop, the 9 young people who were its participants were not too enthusiastic to make a film about their lives. ‘There is nothing interesting in our life. The same forest, the same river, the same village.’ However when they started filming and creating their stories it suddenly dawned on them that their forest is really beautiful and so is their village and the people who live in it. During the filming, Bappa and Bacha told a story about a shark attack, which killed their friend and his brother. It is believed that on the day of Ganga Puja (worship), the mother Ganges ties up the jaws of the crocodiles and the sharks. All boys young and old jump into the muddy Sundarban rivers and swim across from one village to the other as a part of the puja. However a few years ago during one such day, while the boys of Hentalbari village were resting in the shallow waters after a vigorous swim, a shoal of shark attacked them and killed two brothers. Since then they have stopped swimming in the river.

The group of youngsters filmed this interview. They had all been present when the two brothers, their friends had been killed. It was a moment rife with emotion and I was somehow a part of all this. When we sat down to edit this interview, there emerged a discussion on why sharks and crocodiles had suddenly come into their river at this time of the year. Buddha, who had spent most of his life fishing in these waters, said that the sharks would come into their khal (river channel) only during the mating season. They seemed to prefer the comparatively sweet waters of the khal than the brackish waters of the open sea and rivers. Then why has this behavior changed what has happened to change it? I asked them if anything else had changed? The rest of the group jumped in. The weather has become topsy turvy… ‘grisho kale nei grisho, sheet kale nei sheet, boshont’e daakena kokil’. (it’s not hot during summers, not cold during winters, the koel bird no longer sings in spring.’) The islands are slowly being reclaimed by the river. Inch by inch. Day by day. Everything is changing didi. Why is this happening? What is happening to our lives? I asked them if they knew about climate change? I told them the little that I knew. The fog seemed to clear a bit. So there was an explanation. There were reasons. This is why our lives are changing. Is this why the fish is receding in the waters? Is this why it is becoming increasingly difficult for small fisher folk like us to eke out a living from our surroundings? It’s complex I told them. We have just begun to unearth and ask questions. But what is important is that we have begun asking these questions about our lives and this world we inhabit.

How did this happen? From the moment of disinterest and boredom to this moment of intense excitement of wanting set out on a quest, as it where to decipher their world? I believe this happened because of the camera and the process of filming. Framing their reality created the dual process of distancing them from their reality while at the same time linking them closely to it. Looking through the camera gave them the opportunity to almost step out of their own skins and look at themselves from outside giving them the ability to engage cognitively with their own lives, as if it were something to be observed, analysed and wondered about.

It was this sense of wonderment which created this moment of epiphany not just for me but for these young filmmakers as well.

ECO will soon share the film Sundarban- Forest Beautiful, along with 2 other films made by children attempting to decipher and voice their narratives about their lives and their environment. 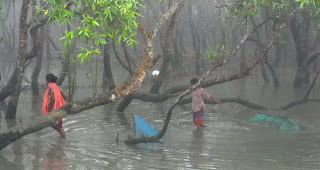