Baheliya is a Central Indian nomadic forest tribe. For their alleged involvement with illegal poaching of wild animals and skin trade, they are unofficially also known as the 'criminal tribe'. What do their children imagine their future to be? Brought up in the Baheliya tradition, some have now been weaned away and are studying in schools. Caught between the ire and apathy of the state and the public and the their own dreams of a respectable future, their film is a story of this trap... the Baheliya's trap.

Experiencing some days of filmmaking with Baheliya children of Panna, Madhya Pradesh 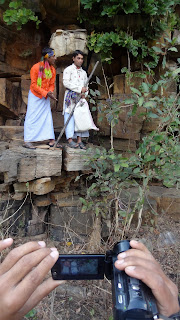 The urban gaze I have grown up with, for a magical animal like the tiger, is nothing but Awe. Mesmerism. Amazement. I later took upon myself to tell these riveting tiger tales and the tales of other wild lives, through the make belief world of the movies.

But when someone like me, encounters a gaze, which is fixed only on the value of the bones and the skin of a live tiger, then your world is slammed into a 360 degrees turn and is forced to rethink your own much nurtured perspectives.

I with a colleague of mine, met and worked with 11 Baheliya Children in Panna, MP, enabling them to make a film about their lives.

Baheliya also known as Pardhi, are a de-notified tribe, infamous as poachers and traders of wild animal body parts. They had a pride of place in the courts of the erstwhile Maharajas at the turn of the last century but with the shrinking forests and the control transiting to the state, their skills and livelihood options were slowly challenged and finally after the enactment of the Wildlife Protection Act of 1972, declared criminals.

11 boys. Most having actively participated in animal hunts, were our students for 10 days.  They were weaned away from their parents and put into a hostel and sent to school. Most were between 6th to 9th grades.

One day as we sat around talking about our lives, we began playing the ‘call’ game. You do a call and I will guess and I will do one and you guess. It was nuanced, of course. Not the usual tiger call and leopard call. But in what situation would the animal call and in which way. Then suddenly there was an imitation from the end of the room, which baffled me. Low soft short whistles. Not this one. I don’t know! Baby peacocks! Holy shit! How did you get that?! And how did you learn to imitate that so immaculately, I asked in obvious awe. They almost blurted out in unison- when they went out hunting and wanted to catch an adult peacock, they would call out like baby peacocks and invariably the mother would come out and walk straight into our traps.

The sledgehammer slammed straight into my face. The children were blasé about what they had narrated and found my befuddled look hugely amusing.

We found the leopard trapped in a leg trap (chap). Slowly we closed in from all sides- my father, uncle and me, each of us with a thick stick in our hand. Getting close we started hitting the leopard with it. Even I was hitting out hard. Then the leopard died. So there would be blood all over, we asked. Not at all! If the skin breaks then no one will buy it. So we need to be very careful how we hit the animal. We have to keep it’s skin intact. It dies of internal injuries.

Someone claimed to have had the liver of a monkey, the other immediately rattled of the medicinal properties of the tiger liver and how it tastes.

If the stories were real or were mixed with moderate quantities of imagination, we didn’t know as we were also enabling them to imagine, if that was possible. But whatever it was…by the evening of the second day, with these stories pouring out from all nooks and crevices, I needed a couple of stiff whiskies to steady myself. To look at another way of encountering wildlife.  Here, me and my colleague were supposed to be the trainers but our moto of being co-voyagers in this journey with the children, was emerging ever so true.

Baheliyas kill to survive. For food mainly. Meat of the smaller mammals and birds, sustain them. Monkey, Partridge, Honey Badger, Peacock, Hare, Wild Boar, small Deers. Leopard Tigers and Lions came in with the emergence of the market for bones and skins.  From minor offenders of small game hunters they became the notorious criminal tribe. The tiger population and the dwindling forest, didn’t help the Pardhis. For reasons way beyond their doing, tiger numbers fell to alarming levels and the Baheliyas were targeted rightly or wrongly for all the poaching unearthed.

Stories of wrongful imprisonment of their parents on trumped up charges, also started flowing alongside the juvenile remand home experiences of our young filmmakers.

My son who is 11 and loves cars also prides himself in showing off his knowledge of the technical insights of the fancy machines under those fancy bonnets. It is just an interest linkage. And these 11, were the children of the forests. It was an occupational fallout that they would be one with the forest and it’s dynamics. When you go out to trap animals, you bloody well know about their life - inside out. You cannot make a mistake and go hungry. Or become the food. The reason could be any, could be a reflection of their lives spent in hiding or the label of criminals, or the sheer shrinking livelihood space or a skill which was increasingly finding no takers – they were in transition. These children were in the process of rethinking their lives. They called it ‘education’. Though we doubted if it was just that.

The workshop at this point, around the 3rd day, threw up intense debates. Were they the only killers?  Are there bigger criminals than them? Were they alone responsible for the crashing tiger numbers? The decimating forests?

Delhi’s Chief Minster for starters came out to be one of the first big criminals. Having decimated 300,000 trees and all the life in and around it, she surely could be one of the biggest ones.  Most of the Baheliyas would hunt only for their existence, only a few would for high stake commercial end. But the Delhi Chief Minister would do it for the malls, highways and entertainment. The children were aghast and also very amused. They couldn’t believe that people in high positions, the educated people, could be so absurdly foolish.

The criminality and the civility tags were turned around.

Yes …taking life is wrong. There could be other professions, which could provide livelihoods. Protecting the animals with their deep insight of the forest and animals could be one of them. What film would they make?

A film which will talk to their parents and try and convince them that their acts have not only endangered themselves but also their next generation. A generation, which is trying to see the future in a different way. A more sustainable way.

But our thoughts were swirling around a different trajectory- will they be able to live through their dreams of change. Will we the more powerful other, allow it? 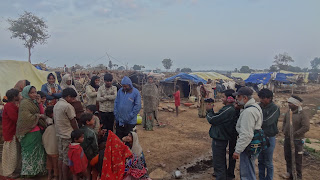 We feel so proud to present three new films and three new sets of experiences, memories and learnings from our last series of workshops...

Mahua- The Tree of Life ; set in villages near Kanha in Madhya Pradesh, children find meaning in a tree which grows in their backyard... in their forest. A meaning deeply entrenched in their life.
https://vimeo.com/58782264

The Story of an Unknown Island ; Sagar Island in the Sundarban delta is poised on the threshold of development as a bridge comes onto their island bringing with it electricity and many industrialisation projects. The children of Sagar stand on the other side of this bridge imagining the fate of their island and their lives...
https://vimeo.com/58776012

Sundarban- Forest Beautiful ; making a film, reframing realities, delving within... is it a little handhold outside this whirlpool called life. Find out what the young people of Hentalbari Island in Sundarban excavate....
https://vimeo.com/58769061