Reaching Adharshila, a small school located in the remote village of Sakad in Madhya Pradesh, after travelling for almost four hours in the scorching heat, should have robbed me of all my enthusiasm for the grueling three weeks that was to come. Instead, I found an oasis amidst the barren and desolate landscape. And the sheer energy, love and kindness shared by the kids rinsed out the tiredness and drove me to work harder and push the boundaries.

On being offered the project, as is common to our generation, one of the first things I did was “google” Adharshila. I was the only one among the crewmembers who had no idea about the space and I was anxious to change that status. What I found on the net was not exactly very illuminating; neither did it promise a great scope for enjoyment. It was just a school for adivasis (indigenous people) employing alternate methods of learning. My initial reaction was one of cynicism. Oh! Another one of those vocational training schools that dot the countryside.

At that stage, what was most interesting was, that we were going to hold workshops on filmmaking, teaching the young kids the craft and technology that it has become today, at the end of which they would make a complete film. Our task was to capture this whole process along with the day-to-day running of the school, its activities, mode of working and other aspects of the life of these kids.

We were met at Indore station by Anil and Sarang, two of the kids who would be participating in the workshop. Things started going berserk the moment they were given a handy cam. A camera in the hands of even adults turn them into children and these guys were, well, just kids! But through that process, somehow I managed to become their friend.

That first night, we slept under the stars out in the open. It was quite an exhilarating experience though lugging all that equipment and travelling for almost a day in that heat had completely worn us out and we were asleep in no time.

The morning brought fresh challenges, as there was no running water in the bathrooms. In fact, for all purposes, there were no bathrooms. One had to fill up buckets and find a secluded corner and do whatever we needed to do. Anyway, we had scheduled our first meeting with the kids post-breakfast and I got ready for the day.

Before the meeting Kavita, formally introduced us with Amit bhai and Jayashree didi, the people who had left a much more comfortable life in the cities to go into this tribal heartland to open a school for the adivasi children of that area. They came across as honest, hardworking who really cared about their surroundings and the people they were working with. Afterwards we had our first meeting with Revali, Pushpen, Prakash, Lelsingh, Anju, Quram, Sanjay and Vinesh who along with Anil and Sarang made up the group who would be attending the workshop and in the process make a film of their choice.

The first session was spent getting to know each other, discussing the format of the workshop and Kavita, the trainer and our director, laying out the ground rules in no uncertain terms. The only spoilsport was the intense heat, which started taking its toll even on our equipment.

The unique thing about the workshop was the participatory element. Right from the very beginning, there was no attempt to impose pre-conceived notions or ideas. The inputs given by Kavita were purely on technical aspects of film making such as different kind of shots, method of editing and storytelling and of course once in a while streamlining their chain of thoughts, if it was travelling in a haphazard direction. Primarily, the film was taking shape through a process of discussion and brainstorming between the kids. It was fascinating to watch them think of an idea, then discuss ways of visually and aurally achieving it.

As the workshop progressed and the participants started opening up and getting more involved what surprised me was the kind of creativity with which they started ideating and building up the film. The process of the training pushed them into terrains they hadn’t explored earlier and that set their imagination free.

In the course of my stay I came to know Adharshila intimately. The first realization of course was that this is not just another vocational training institute. What Amit Bhai and Jaya didi were doing was teaching maths, physics, chemistry, english, history and other things in a practical way, easy to understand and would remain with them for the rest of their lives. It was more about learning by doing. So one group of kids would spend the whole day intimately creating the battle between the tribal leader Khajya Naik and the British forces. This not only helped them learn history and their own culture but also forced them to think innovatively. Thus colourful bottle caps would replace helmets of the British soldiers while painstakingly collected twigs of various shapes would become the arms of the brave tribal warriors. Whoever said that necessity is the mother of invention was bang on.

Children here not only have fun but also learn things that no text book can teach them. They would know as much about quadratic equations as they would about drip farming. And amazingly, they were doing it against all odds. There was always a conflict with power and acute water shortages. The famous Indian ‘jugaad’ was at its zenith there.

Despite power shortages and having to work at night because of the heat, and after endless fights, discussions, arguments and the much-needed forceful motivation from Kavita, the film was finally made. The children and all of us in the crew were so excited. This whole process was a revelation of sorts as each one revealed their strengths and weaknesses. By then I had become Shankho ‘Bhaiyya’. The long hours spent waiting for electricity would transform into spontaneous jam sessions between Sarang on the tabla and me on the guitar or an intense discussion on Hindi films prompted by Anil who happens to be a huge Mithun fan. What it actually did was build a connection that would remain etched in my heart forever.

As I look back, in spite of the hardships we had to go through, the heat, the unavailability of certain comforts, I fondly remember the nights we spent sleeping on an open terrace under a clear sky with the kids talking about constellations, bollywood and music. We fondly referred to it as our ‘million star hotel’ and that is what it is going to remain for me. Forever.

Shankhayan recorded the sound and coordinated production besides being the children's friend on this production.

'Trikon khirkeewala school' is a work in progress and should be up in a few days from now…
This film as well as training children in Participatory Video was supported by Community, the Youth Collective, New Delhi. 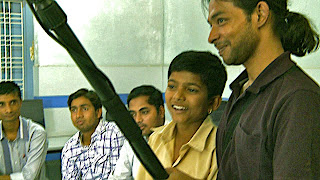