Note on the films children made for CINEART 2010 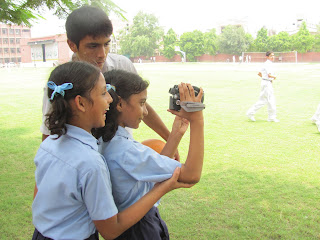 I learnt that a film is made with the heart and the brain. Always heard unity in diversity but today saw it. I found a specialty in me. Avneet Kaur Gandhi, .
Children and the ECO philosophy
Children by natural order could be very imaginative and creative. As we grow up, through our socialization processes, we are trained to be more focused on what we do best. We are encouraged to ‘perform’.  The contemporary education systems in , also encourage rigid confines of success, where creativity and imagination could be stifled in predetermined boxes. 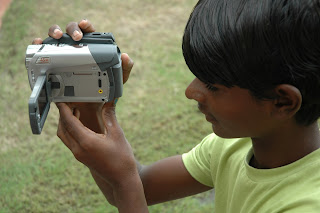 At ECO (Earthcare Outreach Trust), we strongly believe that imagination and creativity of children could be resurrected, scaffolded and awarded. Film making, could be that vehicle of transition. Film making is the platform where all the creative arts meet and it could provide the children an equal opportunity to reconnect with their creativity and imagination in expressing themselves. If the process is a truly participatory one and ensures children, author and own, their cinematic expression, the resultant creative empowerment could be immense.
The project
The ECO-CINEART project has worked on these lines. Two Hundred children, from privileged and disadvantaged sections of the NCR of Delhi were chosen to participate in this programme to make 10 short 2minute films. This project coordinated by ECO, ran for over half a year (2010), involving not only these 200 children but also 20 schools, scores of teachers, school managements and 4 workshop facilitators including backend workshop thinkers and coordinators. The films were made around the themes, which were predetermined by the project team of ECO. Themes were generic environment themes like water, trees, pollution, recycling, carbon footprint, governance, ’s changing face and global warming -to be further developed by the children. But what was amazing was how the children turned around the themes, lensing it with their own personal perspective and experience and came out with 10 so very different environment films. 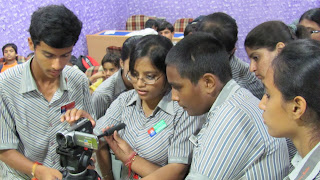 Reinterpreting ‘Environment’
We at ECO want to believe that environment discourse has to be rescued from the normative, to make it useful and effective. To cry hoarse about why, not to pollute or how to save water or why deforestation will destroy our planet, is a passé. If we have to make innovative communication to touch the heart and minds of the audience, the children should attempt personally engaging stories of the world around them. The narrow confines, built around environment advocacy, has robbed the discourse of personal relationships we have with the environment. In the ECO-CINEART film project, children were encouraged to tell their OWN stories of how THEY relate to the ‘environment’, not necessarily how it is defined in their school books. Each 4 day workshop, saw 20 children - equally divided between public and NGO schools, learning story telling and thinking skills through film making tools and attempting to make their own little films. The story selection, ideating, story boarding, the use of camera and all edit decisions, were done hands- on, by the participating children.
I felt as if I was a professional movie maker and I really thought as if I am the one who can change people’s opinion about the Earth. Palak Arora, New . 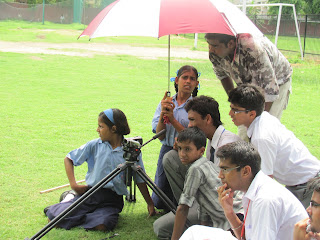 Children as Authors
In the end we have a bunch of 10 short films, which are not just made by children, but in the purest sense, are authored and owned by these children. Films in which they have spoken their minds and given a slice of their lives and thoughts to the outside world. We adults, should be privileged that these children have invited us into their world and allowed us to participate in this process by asking us to witness, this unfolding of their minds through their films.
Krishnendu Bose
Managing Trustee, ECO
Delhi 2010
Posted by E C O at 02:04